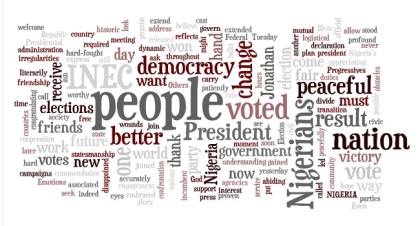 A new twist has been added to the election results saga. Prof. Jega has announced that the whole results of the elections have been one big joke to mark April Ist – fools’ day. No kidding!

LOL. To start with, I don’t have a PVC. Except for coming out to save a life, I was cooped up at home all Saturday. My friend from another city had been on the queue for accreditation for 6 hours and was near fainting. Some drinks and snacks from the house brought her back on her feet. Saturday and Sunday have come and gone. So have the delays of Monday and Tuesday morning. The results are out.

Now that most Nigerians have voted in Buhari; we all followed the results and saw the great difference in votes. Now that we have voted him in, I hope we will be able to demand from him for the common good. Let the cries of change which have been sweeping through our land be indeed a positive change.

Meanwhile, Jonathan did an unheard of thing in the history of our nation. He placed a call to Buhari just to congratulate him. Best part was – he did it on time. He is a sharp man. He saw the trend and reached out to his rival before the official results were out. I was so sure that Abdusalam Abubakar was going to shed tears when he addressed press men and women in the Aso Villa yesterday. He appeared so moved by the presidential gesture.

Whatever the reasons for Jonathan’s call, we owe the calm we are experiencing now after the results to his action. There are more people on the streets today than on Monday and Tuesday. Life is returning to normal. The risks involved in going out are lesser.

Just an insight on how Nigerians are reacting to the news

(Join me in my wonder. What was the guy expecting o! Perhaps he was spoiling for a fight)

PDP: switch? No o. I remain loyal. But first of all, I am a Nigerian. Since we have lost, next thing is to work with the opposition. Sai Baba

I mean, who is not impressed by these sentiments, this peace. Anyway, the gubernatorial elections come up in less than 14 days. For me in Lagos, it’s a choice between one party on the one hand and the candidate of the second party on the other hand. Who do you vote for – the party or the man?

Just so you know this. Your opinion counts! Cancel reply